I’m in the mood for handspun, whether it is knitting handspun, or the making of it.

First, the knitting of it. As I mentioned in the last couple of posts, I used up bits of handspun for charity knitting, which is a good thing. That means I can now spin more, quite happily! But there was some yarn to knit – this lovely BFL from Into the Whirled.

It is nice, but it didn’t come out how I planned to spin it – I wanted to try Fractal Spinning, which means taking a hand-dyed top, splitting it in half, and then with one of the halves, you split it lengthwise again. Then you spin each half, and the thinner quarters are spun end to end, and it turns out really cool. So I did the splitting and the spinning, but my labels came off the spun singles, and I was left with a mess, so I just spun it any old way, and the result was two different hanks:

With the new show Outlander on Starz taking up more of my time than is reasonable to admit (I was a reader of the books back in the early 90’s, so not a surprise), I got hooked on the idea of handspun fingerless mittens. So I knit one fingerless mitten – and it looked great:

and then I knit the second one:

And they didn’t match at all. In fact I kinda think no one would say to themselves – hey, they were part of the same colorway (see what I mean when I said the plying was a mess?). What to do? I decided to knit a third one:

and now I could pick which ones matched the best.

I picked the last photo. And now the unloved third mitten will be frogged and with the other yarn, become either a cowl or a hat to match…

The other spin-related work is the lovely Targhee wool from my on-line friend Suzanne – I had spun the warmer tones, now it was time to play with the greyish-taupes. The yarn I’m shooting for will be a 2-ply light fingering/lace weight with a mostly worsted style of spinning. The light color is done, and I’m half-way through the darker color. I’m hoping to do a tone-on-tone shawl of my own pattern devising. Should be fun!

In the meantime, I knit a chemo-cap for one gal in my high school class 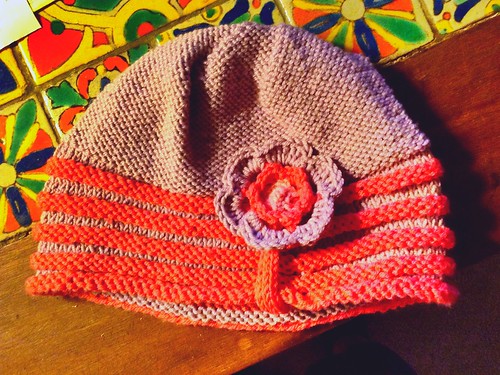 It’s the Zelda Cloche (rav link), which works well for chemo gals because it has a bit of style, but fits well. Now it appears another classmate will need one now. I am beyond sad and frustrated that our exposure to chemicals is systematically underplayed as a cause of cancer. Too many good folks are getting it!

Now onto some secret knitting and a sweater for my little cousin Rachel. I’m knitting Hitofude in Shibui Linen (rav link) – a fun pattern done all in one piece and the yarn will have some serious drape to it! 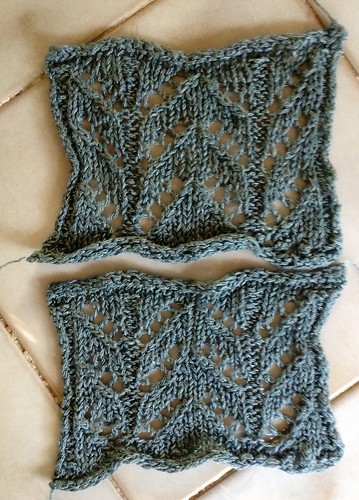