Almost exactly six years ago, I posted and published a free iPod cozy pattern for the nano that I owned at the time. Together, they looked like this: 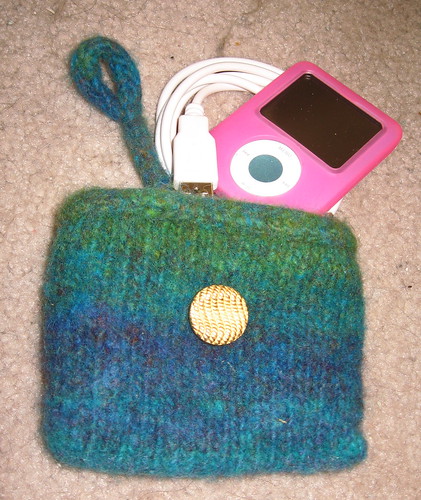 The nano fit perfectly into the cozy, and for the time I had the nano, all was well, which lasted maybe a year and a half, when one winter night I had to leap out of my car suddenly, and then it fell out and I might have crunched it up. Yeah, a sad end.

So a new iPod Touch came into my life, and it was lovely although bigger than the old nano – I could tweet, and send email, and listen to podcasts and music too. It pretty much got me through my bout of chicken pox that I got before the last (and final) Sock Summit – being able to tweet, email and listen to audio books from my bed was great.

But eventually it became obsolete – no Twitter, no email, no calendar, and I was running out of room for my playlists for music for my aqua classes. But the cozy lived on,although I had to replace the I-cord button loop with some Cascade 220.

Last summer I upgraded to a 5th generation iPod touch – basically an iPhone 5 without the phone (and without the expensive data plan). I love this one too, and because it’s now used a fair amount at the pool, it needs a shockcase, and even then, it’s still bigger than the old iPod Touch, so now we have a problem:

The cozy is pretty much toast. Mind you, the cozy has lasted me longer than 2 generations of iPods, so I’m not complaining, but even felted wool has it’s limits on stretchiness and durability:

I’ll tinker with the old pattern, and some up with something that fits this new generation of iThings. Stay tuned!