Sorry about the relative radio silence. No, it wasn’t a “Ravelry Top 5 Hangover” or any other fiber related over-indulgence. Partly it is that my public knitting is slow and not as interesting as I’m putting together new classes to teach at Bluebird and I have some knitting design deadlines looming.

But, I do have one thing to share: double knitting is so practical. I confess that I’ve only been double-knitting for a couple of years, but there is so much to like about it – colorwork! lofty items yet warm! great insulation!

I listen to the Craflit podcast – you do too, right? – in it, one character, Mrs. Thornton, is admiring of another’s “double knitting” as being very practical.  She’s right! This project  is a very small sort that makes double knitting rock the kitchen – potholders!

I confess that knitted potholder are sometimes wimpy cousins of their crocheted brethren – they just aren’t quite up to the task. But double knitting increases the thickness (and insulation) and allows for pretty too! Here are a couple that I’ve been working on: 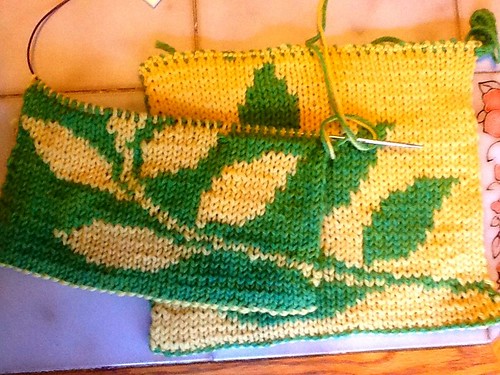 I’m doing these as mirror images of each other. The pattern is called Skog/Forest – but it’s not in English (it’s free and in Norwegian), of course I just used the chart with my worsted weight yarn. 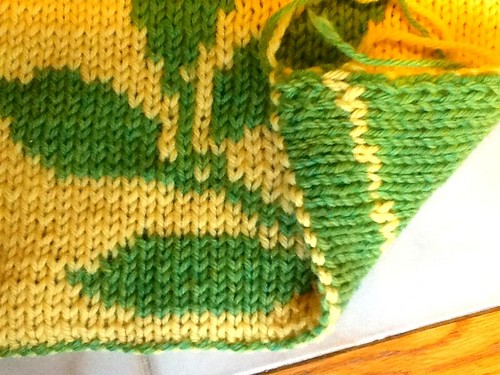 And notice this cast=on? It’s really cool, and would be perfect for casting on a double-knitted hat – it’s basically a two color long-tail mirrored cast on. Check out this video by Alasdair Post-Quinn if you want to try it – I love it. Unfortunately, the cast-off that would match this is beyond my desire to reverse engineer, but hey, it’s a potholder.

I can’t wait to finish these so I have some nice ones in the kitchen!

Well, it’s been an exciting 48 hours in the land of viral pattern adoption. The Beads and Lace Fingerless Mittens pattern showed up late Friday night and Saturday on the Hot Right Now pattern page on Ravelry. The highest screen shot I got was:

Yep, that’s my pattern at No. 3, and apparently it went to No. 2 for a brief time. Wow. That was unexpected.

It goes to show that persistent pays off in the unlikeliest ways. Midweek I designed a fingerless mitten that when I knit up the sample, I went “Ugh.” It was frogged immediately. Under the pressure of needing a pattern for the class, I whipped this puppy up (knitting on the fly and putting together the chart right afterwards before I forgot what I did).

I expect it will be a while before this lovely thing happens (if ever again!), but in the meantime, I have to admit I think maybe I’m for real on the knitting designer thing.

I am teaching a new workshop (aka mini-retreat) at Bluebird Yarn and Fibercraft tomorrow on knitting with beads and lace – a truly luxury kind of knitting.

And to celebrate, I am offering the pattern for free until the end of the month on Ravelry. Click on buy now button and you’ll be taken to check-out. No need for a code, the pattern will be free!

There is a ton of knitting happening at Chez Revknits. I’ve starting a friendly contest over at the Ravelry Afghans for Afghans board called “March Madness” – our goal is to knit 100 items in the month of March (if we go over, that’s ok too). We have prizes! So I’ve been knitting as part of the goal (not for the prizes, because I’m organizing). So far, Three pairs of socks are done:

There’s a pair of mittens on the needles, but that is just worked on when I’m not working on other stuff, which is to say, I’m doing some designing for publication and teaching.

I saw a post by radio host Ira Glass the other day about starting a new creating adventure, and he noted that when you are working at something new, your efforts will not match your taste – which is to say that you know what is really, really good, and you are not that good yet. Which can be discouraging, and offputting. Yeah, I think that’s where I am now – it takes a while to get a design good enough these days. Ira’s advice is to keep going and creating. Thanks, Ira, I will!

I can share one item that I’ve designed for an upcoming retreat this Saturday, March 22nd, at Bluebird Yarn and Fibercraft called Knitting Luxury: Lace and Beads. The sampler we’ll do in class uses about 7 different techniques for placing beads, and then I designed a fingerless mitten pattern using 4 of them:

It’s a really quick project that could be a lovely gift knit. Pattern will be posted next week!

Finally, I’ve started back baking bread – lovely sourdough bread with organic flours and no additives. This is my third loaf since I started back:

If the thought of baking bread seems hard, go with these Sourdough Bread directions by S. John Ross. Super simple, and I make lovely bread with just this.

Earlier this week, I posted about my father, and missed the anniversary of his birth by one day. Oops. Kind readers that you are, no one commented on my blunder.

Today is a different kind of anniversary – the anniversary of my mother’s death one year ago. It’s the kind of anniversary that one finds inescapable, especially because the days leading up to it are harder than usual. Add in, in my case, leading Ash Wednesday services where, in anniversary mode, we ponder the meaning life and death through a service featuring ashes, and just to make sure we get it, we note that we will all turn to dust some day.

Anniversary actually means “annually returning” in latin, although I am tempted to ponder whether the annual “return” might be to see whatever is commemorated from a new point of view. This year March 7th is likely to be hard, five years from now, I suspect that somehow I will feel different about it all.

At one year, I realize how far I have come. There are days when I still acutely miss my mother, while on others I simply celebrate who she was and the gift of life that she gave me.

At one year, I realize how recent it has been. There are days when I still find myself thinking how much Mom would like to see/hear about something. I still have some of her boxes unopened in my apartment. There is plenty left in the journey to work through.

Today, I feel her spirit today, washing over me, a tide of love that I cannot but cry with. I walk lighter because of it.

My father was born 100 years ago today, March 4, 1914. In this world World War I had not yet been declared,the border between Mexico and the US in California was porous. The Great Depression was not thought of.

My dad was a kind man who had a tough childhood. Born in Mexico, his mother died when he was about 3 years old. His father, not really a good parent, put him and his brother and sister into an orphanage across the border in San Diego, a small town at that point. The family fell on hard times in the Revolution. He was tossed about, until his mother’s sister, living in Pasadena, took him and his older brother, Miguel, in. My dad stayed in the USA the rest of his life. His sister and half-brother also came to this country.

He was a member of the National Guard, and one of the first to be called up after the bombing in Pearl Harbor – he was already in the Army in March 1941,  reached Hawaii a mere six months after the bombing. Most of his time was spent waiting on Pacific Islands as an army officer. The bombing of Hiroshima and Nagasaki, resulting in the surrender of Japan, saved my father from seeing any action in the war.

After that, my father lived the quiet steady life that many veterans of the war did. He received an award for all his volunteer work at my schools, was always the go-to guy for construction projects by the PTA. He built all the small floats for the annual Camellia Parade for my brownie and Girl Scout troops.

Steady, reliable, talented, artistic, pragmatic, silent and strong. Full of love for his family. Thanks for the standard, Dad!

Above, he is pictured at his 80th birthday party, with me, my mom Helen, and brother Randy. May they all rest in peace!